Ready for Ready Player One?

There’s still time to read the best selling book, Ready Player One, before it comes out in theatres on March 30th. It takes place in a bleak future where people escape their 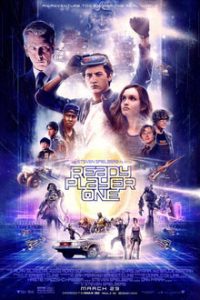 poverty laden lives by plugging into OASIS, an online utopia. The creator has left three keys in this online world and the finder will inherit his fortune.

Read it before you watch it here!

Ready Player One by Ernest Cline

Armada If you enjoy your alien taking over the world stories with an abundance of pop culture and nerd references thrown in, then this might be your book.

And finally check out one of these if you’ve already availed yourself of Ernest Cline’s books and find yourself wanting more.

In Real Life Graphic  novel by Cory Doctorow and Jen Wang featuring Anda, a gamer who enjoys spending time on Coarsegold Online, a multiplayer role playing game. After spending most of her time in Coarsegold, Anda’s ideas of right and wrong develop complexity as she meets a user who is doing something illegal but necessary for survival.

Death Dream Ben Bova’s “novel of “technology gone too far” could easily take place today. Dan Santorini has been hired to develop the ultimate virtual-reality simulation game. He moves to Florida only to find that something is very wrong. First his daughter has some disturbing encounters in the games that the company provides for her school, and then a colleague is killed while practicing one of his VR programs. As Dan races against time to find the answers and to save his family, he is hampered at every turn by greedy investors, a desperate boss, and government investigators. A well-researched and timely book.-Susan McFaden, Fairfax County Public Library, VA 1995 Reed Business Information, Inc.

The Eye of Minds “Michael is a skilled internet gamer in a world of advanced technology. When a cyber-terrorist begins to threaten players, Michael is called upon to seek him and his secrets out”– Provided by publisher.

Reamde When his own high-tech start up turns into a Fortune 500 computer gaming group, Richard Forthrast, the black sheep of an Iowa family who has amassed an illegal fortune, finds the line between fantasy and reality becoming blurred when a virtual war for dominance is triggered.

Anyone else can’t wait for A Wrinkle in Time to come out in theaters? If you want to read the book before seeing the movie, you still have one week left! And we have SO many ways to read, watch, or listen to the story. 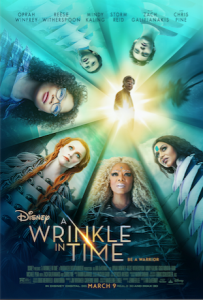 Video of Disney’s 2004 mini-series of the title

If you’d like to continue the adventures of the Murry family from A Wrinkle in Time, read these…

A Wind in the Door With Meg Murry’s help, the dragons her six-year-old brother saw in the vegetable garden play an important part in his struggle between life and death.

A Swiftly Tilting Planet The youngest of the Murry children must travel through time and space in a battle against an evil dictator who would destroy the entire universe.

Or if you’d just like to read more of Madeleine L’Engle’s work, check out…

The Young Unicorns A seventeen-year-old boy, former member of a tough New York gang, a blind and talented twelve-year-old musician, the Austin family, and Canon Tallis are among the key characters who become involved in a frightening and evil scheme relying on the ability of a refined laser to give complete power over people’s minds.

Two Part Invention: The Story of a Marriage This moving memoir documents a marriage of more than forty years between two gifted people, a long term marriage that was: “full of wonderful things, terrible things, joyous things, grievous things, but ours.”

And Both were Young Flip doesn’t think shell ever fit in at the Swiss boarding school. Besides being homesick for her father and Connecticut, she isn’t sophisticated like the other girls, and discussions about boys leave her tongue-tied. Her happiest times are spent apart from the others, sketching or wandering in the mountains.

Camilla Fifteen-year-old Camilla gains new maturity through her relationship with her best friend’s brother and the growing realization that her parents are fallible individuals.

A Ring of Endless Light During the summer her grandfather is dying of leukemia and death seems all around, 15-year-old Vicky finds comfort with the pod of dolphins with which she has been doing research.

A Circle of Quiet Madeleine L’Engle’s personal place of retreat near a brook, a ten-minute walk from her family’s country home. This volume is a sharing of her inner life shaped primarily from materials in her journals.

Dare to be Creative Lecture presented by the author at the Library of Congress’ National Children’s Book Week. She discusses censorship, writing, love, and friendship.

If you enjoyed watching Lady Bird, the film that broke the best Rotten Tomatoes record of all time last year, you’ll probably enjoying reading some of these books from our collection. Comical mother/daughter relationships abound and many of them have been made into popular movies as well. Happy reading! (Summaries plucked from Amazon.)

Joy Luck Club
The Joy Luck Club tells the story of four older Chinese-American women and their complex relationships with their American-born daughters. The story moves from China in the early twentieth century and San Francisco from the 1950s to the 1980s, as the eight women struggle to reach across a seemingly unpassable chasm of culture, generation and expectations to find strength and happiness.

Anywhere But Here
A national bestseller—adapted into a movie starring Natalie Portman and Susan Sarandon—Anywhere But Here is the heart-rending tale of a mother and daughter. A moving, often comic portrait of wise child Ann August and her mother, Adele, a larger-than-life American dreamer, the novel follows the two women as they travel through the landscape of their often conflicting ambitions.

Pride and Prejudice
In one of the most universally loved and admired English novels, a country squire of no great means must marry off his five vivacious daughters. Jane Austen’s art transformed this effervescent tale of rural romance into a witty, shrewdly observed satire of English country life.

Where’d you go, Bernadette?
Bernadette Fox is notorious. To her Microsoft-guru husband, she’s a fearlessly opinionated partner; to fellow private-school mothers in Seattle, she’s a disgrace; to design mavens, she’s a revolutionary architect, and to 15-year-old Bee, she is a best friend and, simply, Mom. Then Bernadette disappears. To find her mother, Bee compiles email messages, official documents, secret correspondence–creating a compulsively readable and touching novel about misplaced genius and a mother and daughter’s role in an absurd world.

Are you my Mother?
A woman, unhappily married to a closeted gay man, whose artistic aspirations simmered under the surface of Bechdel’s childhood . . . and who stopped touching or kissing her daughter good night, forever, when she was seven. Poignantly, hilariously, Bechdel embarks on a quest for answers concerning the mother-daughter gulf.

Divine Secrets of the Ya-Ya Sisterhood
A poignant, funny, outrageous, and wise novel about a lifetime friendship between four Southern women, Divine Secrets of the Ya-Ya Sisterhood brilliantly explores the bonds of female friendship, the often-rocky relationship between mothers and daughters, and the healing power of humor and love, in a story as fresh and uplifting as when it was first published a decade and a half ago.