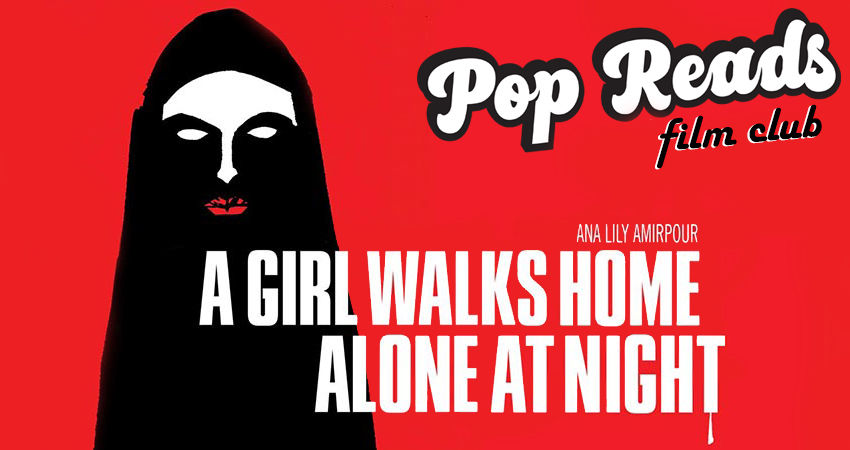 Join Downtown Campus Library for a virtual film discussion, open to all UCF and Valencia students, faculty, and staff. We will be discussing A Girl Walks Home Alone at Night, available for free streaming on Kanopy. This is not a group watching event, so watch the film beforehand and come ready to discuss. The discussion will take place on June 26th at 6:00pm on Zoom. Click here to sign up! On the day of the film discussion, we will email you a link to the Zoom meeting.

A Girl Walks Home Alone At Night is a 2014 Iranian horror film. This visually stunning, melancholic film concerns a skateboarding vampire and the quiet city she terrorizes. Directed and written by Ana Lily Amirpour, this film is for anyone who is a fan of westerns, vampires, and things that go bump in the night.

Join the UCF Libraries and the UCF Department of Anthropology in celebrating Día de los Muertos or Day of the Dead.  This is a traditional Mexican holiday when families and friends gather to honor and remember those that have died.  Typically on Day of the Dead, elaborate altars are created and offerings are made to aid loved ones on their spiritual journey.

Days of the Dead: living tradition
With the arrival of the conquistadors, many ancient Mesoamerican rituals were absorbed into Christian holidays. This program examines a collection of sacred, social, and artistic traditions that survived European assimilation and now compose one of Mexico’s most important annual festivals. The film follows the travels and experiences of a young Purepecha artisan, her grandmother, and their family during the weeks leading up to the Days of the Dead. As these struggling craftspeople market their wares, study new techniques, and prepare for their deceased patriarch’s spiritual return, viewers will see a wide variety of folk art practices-from pottery painting to flower decoration to papier-mache skeleton sculpture-coalesce into a momentous cultural event.

From megalomaniac leaders to mass suicides, the word cult is an overwhelmingly negative one in popular culture. This series digs deeper by considering what draws people to such groups, how charisma is constructed, and how boundaries between religions and cults are delineated.  Each movie will be followed by a facilitated discussion by a religion and cultural studies faculty member.

Featuring never-before-seen footage, this documentary delivers a startling new look at the Peoples Temple, headed by preacher Jim Jones who, in 1978, led more than 900 members to Guyana, where he orchestrated a mass suicide via tainted punch.

The Trials of Muhammad Ali investigates its extraordinary and often complex subject’s life outside the boxing ring. From joining the controversial Nation of Islam and changing his name from Cassius Clay to Muhammad Ali, to his refusal to serve in the Vietnam War in the name of protesting racial inequality, to his global humanitarian work, Muhammad Ali remains an inspiring and controversial figure.

A documentary about a man who impersonates a wise Indian Guru and builds a following in Arizona. At the height of his popularity, the Guru Kumaré must reveal his true identity to his disciples and unveil his greatest teaching of all.

Fall 2019 Movie series sponsored by the Religion and Cultural Studies Program and co-hosted by UCF Libraries.

Everyone is talking about HBO’s gripping new miniseries, Chernobyl which is a personal look at one of the worst man-made catastrophes in history. Have you been pulled into the story as well and want to know more?

UCF Libraries has a great collection of books and documentaries about the meltdown at the Chernobyl nuclear power plant. Check these out and learn more about what happened and how it has shaped the use of nuclear power in the West.

Chernobyl Record: the definitive history of the Chernobyl catastrophe by R.F. Mould

Chernobyl: the history of a nuclear catastrophe by Serhii Plokhy

The Truth About Chernobyl by Grigori Medvedev

The Lessons of Chernobyl: 25 years later edited by Elena B. Burlakova and Valeria I. Naydich (ebook)

Manual for Survival: a Chernobyl guide to the future by Kate Brown

Midnight in Chernobyl: the untold story of the world’s greatest nuclear disaster by Adam Higginbotham

Living under the cloud : Chernobyl today produced and directed by Teresa Metcalf (DVD)


Did you know Russia isn’t the only one who had a nuclear accident?

If you are curious about the United States’ own brush with nuclear disaster at Three Mile Island in Dauphin County, Pennsylvania, in 1979, we have reading on that as well.

Three Mile Island: the most studied nuclear accident in history: summary: report to the Congress by the Comptroller General of the United States

The Warning: accident at Three Mile Island by Mike Gray and Ira Rosen

Radiation nation: Three Mile Island and the political transformation of the 1970s by Natasha Zaretsky

Join the UCF Libraries in celebrating Día de los Muertos or Day of the Dead.  This is a traditional Mexican holiday when families and friends gather to honor and remember those that have died.  Typically on Day of the Dead, elaborate altars are created and offerings are made to aid loved ones on their spiritual journey.

Mexico from the BBC “Feasts” series:
Series in which food writer and presenter Stefan Gates immerses himself in some of the most extraordinary feasts and festivals on earth. By joining ordinary people in these strange and wonderful distillations of their culture and beliefs, he hopes to gain a revelatory insight into how the world thinks and feels. Stefan goes on a wild emotional and spiritual rollercoaster ride, starting with a teenage girl’s bizarre coming-of-age ceremony and ending with the Day of the Dead, a cacophonous cross-cultural festival of the senses during which Mexicans truly believe that their loved ones come back from the dead for three days every year to spend the day with them.