Every year, the UCF faculty and staff community donate to the Believe campaign. The campaign benefitted all colleges, departments, and initiatives on campus, as well as funding services that provide direct help to students, like Knights Helping Knights Pantry, and scholarships like First Generation Scholarships and the Libraries’ June Stillman Scholarship. The 21st Century Library building fund was also a beneficiary of Believe.

To encourage participation, our own David Benjamin, head of Special Collections, selflessly offered to go blonde if the library increased their participation to 51%.

The totals are in: the UCF Libraries had a 59% participation rate this year! We are proud to have helped UCF donate a total of over one million dollars to many worthy causes.

David’s new look has not changed his enthusiasm for Special Collections and Archives (SCUA). Check out the display on the 5th floor of the John C. Hitt Library, Recollections of a Cartoonist: The Glenn “Marty” Stein Collection of Cartoon Art, 1955-2013 to sample some of SCUA’s excellent work. And if you spot David Benjamin, ask him if it’s true blondes have more fun.

The UCF print collection contains over 1.5 million volumes. If you laid them end to end, they would stretch 213 miles – 5 trips to the Magic Kingdom!

Follow one (or all) of our 5 social media accounts for more library facts and fun.

Stein, a Florida native, drew editorial cartoons from 1999 to 2008 for three Orlando area publications, the Orlando Business Journal, The Apopka Chief, and the Spanish-language paper La Prensa. Stein’s editorial cartoons tackled issues the nation and the world were debating at the turn of the millennium, including immigration, civil rights, and political corruption – many of which are still relevant today. In addition to political cartoons, Stein also created a number of gag cartoons and comic strips, several of which are included in the exhibit. In 2009, Stein gave up cartooning to focus on writing and lecturing about polar history.

The Special Collections & University Archives’ exhibit space is located on the fifth floor of the John C. Hitt Library. The exhibit will be up through July 2017. 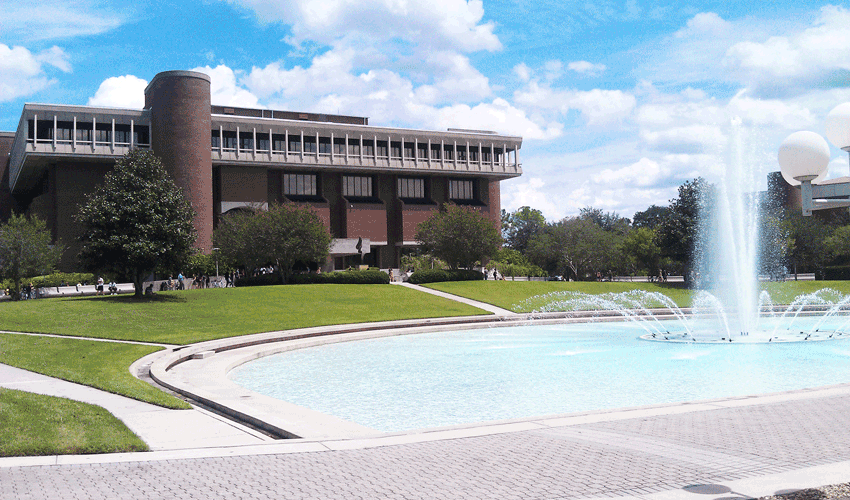 Did you know you can receive text notifications for your library items?

Receive messages when your items need to be renewed or if a book you’ve requested becomes available. Just log in to your Library Account, click My Account on the top right and select Set Alerts. You can choose which alerts you’d like to receive and change them any time!

From your account you can view the items you have checked out, when they’re due, and if they can be renewed. So go online or stop by one of the UCF Libraries’ service desks and sign up for text alerts and never pay an overdue fee again!

On display in March and April at the Rosen Library is an exhibit featuring two student organizations–Transfer Knights and Tau Sigma National Honor Society. Transfer Knights is a social organization that connects transfer students with the rest of UCF. Tau Sigma is a national honor society that features the academic work of transfer students. Newsletters, schedule of events, and contact information are provided for students who are interested in joining these student organizations. Exhibit was curated by Velencia Duvra with assistance by Schuyler Kerby.