ORLANDO, June 2016 – The University of Central Florida (UCF) Libraries is happy to announce that Ms. Melissa Franco, student assistant in the John C. Hitt Library Acquisitions & Collection Services since January 2015, will receive the $2,000 June S. Stillman Memorial Endowed Scholarship for Libraries Student Assistants and USPS Staff for the academic year 2016-2017.
Ms. Franco is a sophomore with a 3.5 GPA working on her degree in Health Sciences. Diagnosed with Type 1 diabetes at the age of 6, Franco has been around medical professionals all her life. This close proximity has given her a great appreciation for and a desired to be part of the skilled and dedicated healthcare profession.
Franco’s dream is to work as a physical therapist in a US Military base rehabilitating active duty service members and veterans. Toward that end she actively volunteers at the Orlando Veterans Affairs Medical Center. Franco also serves as the Vice President of the UCF Type 1 Student Organization and volunteers at a Cora Rehabilitation Clinic. Other achievements and activities include the National Society for Leadership & Success, Dean’s List in the College of Health & Public Affairs, and Undergraduate Physical Therapy Student Association. Franco was described in her letters of recommendation by her Libraries supervisor, one of her professors, and a MPAS at the UCF Student Health Services as “exceptional,” “quick and thorough,” and “compassionate and caring.” 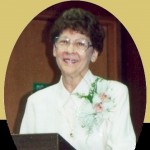 Named for a truly remarkable woman, this scholarship was established in 1999. This is the 18th scholarship awarded. June S. Stillman was one of the first two librarians hired when the UCF (then Florida Technological University) library was opened in 1968. Her impact on students can be seen from the 25th anniversary survey of the first graduating class, who listed her most often as an important person from their student days. She got her second Master’s degree (English) from UCF while working as the Head of Reference Services at the library. She retired from UCF in December 1996 and tragically lost her life to an assailant in March 1998. Her friends and family established the June S. Stillman Memorial Endowed Scholarship in her honor. She is remembered as the consummate professional, the epitome of gentility and compassion, and a true and loving friend.