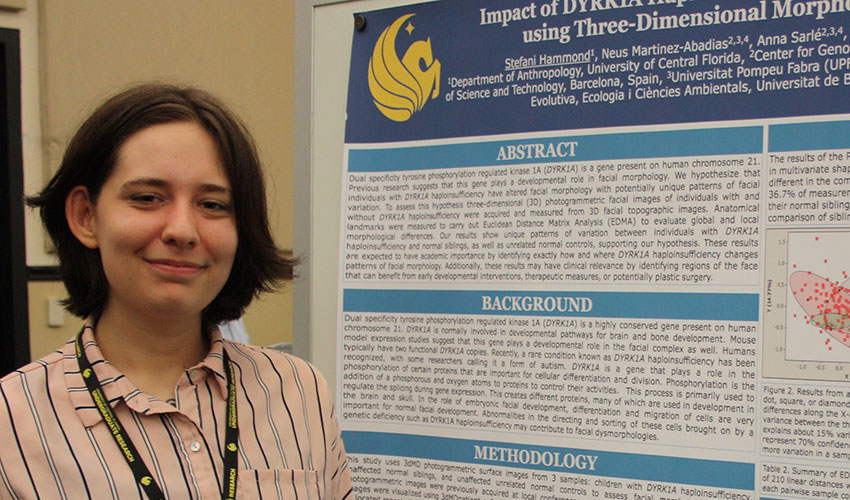 The University of Central Florida Libraries is proud to announce that Stefani Hammond is the 2019 recipient of the June S. Stillman Memorial Endowed Scholarship.

Hammond is a junior majoring in Anthropology. She plans to obtain a PhD, specializing in Biological Anthropology, and to become a professor at an established research university. A first-generation student, she began working as a student assistant in Circulation Services in the John C. Hitt Library in August 2017.

Hammond has served as a mentor for UCF’s Resident Leadership Conference and is the current Secretary of the Lambda Alpha Anthropology Honors Society. She has also been a Resident Assistant and a Conference Assistant with the UCF Department of Housing & Residence Life, a role with which she credits with teaching her empathy and compassion in leadership.

This is the 21st awarding of the Stillman scholarship, which is given to a student or staff member of the UCF Libraries. June S. Stillman was one of the first two librarians hired when UCF (then Florida Technological University) opened in 1968. Her impact on students can be seen from a 25th anniversary survey of the first graduating class, a majority of whom listed her as a key figure from their student days. Stillman received her second master’s degree in English Literature from UCF while working as the Head of Reference Services at the Library. She retired in 1996 and tragically passed away in 1998. Her friends and family established the June S. Stillman Memorial Endowed Scholarship in her honor. She is remembered as a consummate professional, the epitome of gentility and compassion, and a proponent of lifelong learning.