Knight Reads is our collection of popular fiction and non-fiction reading. There are Knight Reads collections in the John C. Hitt Library and in the Rosen Library.

Check out these titles we just added to the Knight Reads shelves in the John C. Hitt Library: 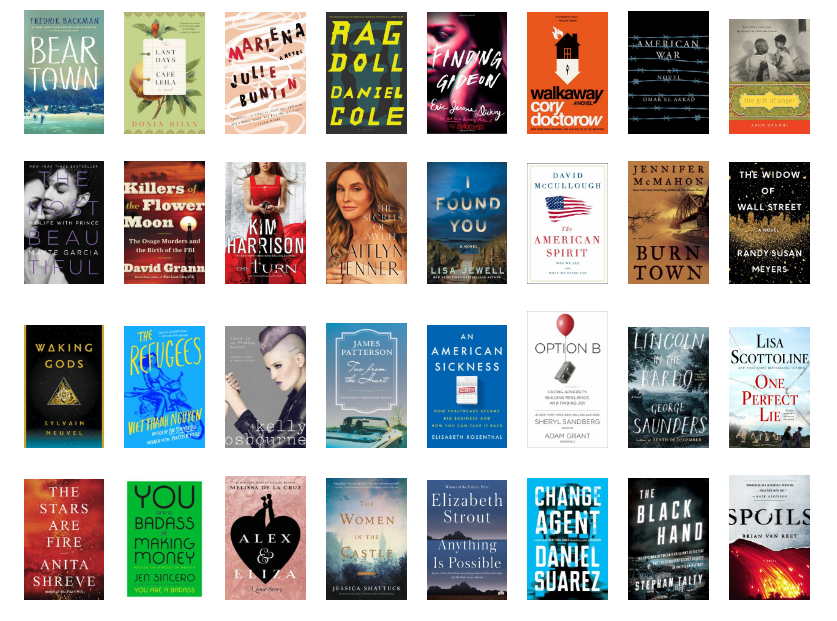 If you’d like to suggest a title to add to Knight Reads, please email it to carrie.moran@ucf.edu

Alex and Eliza by Melissa De la Cruz
American War by Omar El Akkad
An American Sickness by Elisabeth Rosenthal
Anything Is Possible by Elizabeth Strout
Beartown by Fredrik Backman
Burntown by Jennifer McMahon
Change Agent by Daniel Suarez
Finding Gideon by Eric Jerome Dickey
Golden by Marcus Thompson
I Found You by Lisa Jewell
Killers of the Flower Moon by David Grann
Lincoln in the Bardo by George Saunders
Marlena by Julie Buntin
My Name Is Lucy Barton by Elizabeth Strout
One Perfect Lie by Lisa Scottoline
Option B by Sheryl Sandberg; Adam Grant
Ragdoll by Daniel Cole
Spoils by Brian van Reet
The American Spirit by David McCullough
The Black Hand by Stephan Talty
The Gift of Anger by Arun Gandhi
The Last Days of Café Leila by Donia Bijan
The Most Beautiful by Mayte Garcia
The Refugees by Viet Thanh Nguyen
The Secrets of My Life by Caitlyn Jenner
The Stars Are Fire by Anita Shreve
The Turn by Kim Harrison
The Twelve Lives of Samuel Hawley by Hannah Tinti
The Widow of Wall Street by Randy Susan Meyers
The Women in the Castle by Jessica Shattuck
There Is No F*cking Secret by Kelly Osbourne
Two from the Heart by James Patterson; Frank Constantini (As told to)
Waking Gods by Sylvain Neuvel
Walkaway by Cory Doctorow
You Are a Badass at Making Money by Jen Sincero