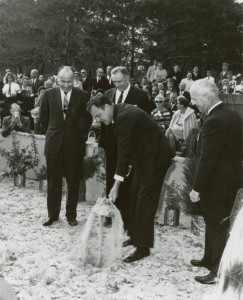 Governor Claude R. Kirk, Jr. does the honors during groundbreaking on March 19, 1967 at the sandy site that was to become UCF. On hand to lend their moral support are Louis Murray, M. D., left; local members of the Florida Board of Regents; Chester R. Ferguson, Regents chairman; and University President Charles N. Millican, right.

In the early 1960s, Orange County’s future seemed tied more and more to the aerospace industry. The Mercury program from nearby Cape Canaveral captivated the nation and the new Martin Marietta facility in South Orange County was creating a new generation of rockets and missiles. There was an increasing demand for local educational facilities where the growing numbers of scientific and technical employees at these and other electronics and engineering companies could pursue advanced studies.

Business, professional and government leaders quickly enlisted in the cause of building what some called a “Space University” to educate current and future students for promising space-age careers in engineering, electronics and other technological professions needed to sustain the growth of these industries in Central Florida. William H. Dial, a bank president and lawyer with friends in Tallahassee, began lobbying for passage of what became Florida Senate Bill No. 125. He enlisted the aid of former state Senate President William Shands, who used his many connections in the Florida Senate to help convince lawmakers to support the bill. With Shands’ help, and the editorial support of Orlando Sentinel publisher Martin Anderson and Senator Beth Johnson of Orange County, the bill finally moved out of committee and easily passed both the House and Senate. A citizen’s advisory committee, led by Dial, was formed to help finance and build public support for the university.

On January 24, 1964, seven months after the governor had signed Bill No. 125 into law, the Board of Control (from 1905 to 1965, then the Board of Regents, or BOR, from 1965 to 2001 and now the Board of Governors) selected a 1,227-acre tract along Alafaya Trail in northeast Orange County, 12 miles northeast of downtown Orlando. It was selected as being the most accessible to the largest number of people in the east central Florida area. Most of the land was acquired from Frank Adamucci, a New Jersey building contractor who donated 500 acres and sold another 500 acres for $500,000. Donations from other landowners gave the university more frontage on Alafaya Trail and pushed the total size of the parcel to 1,227 acres.

In order to be eligible for funding from the 1965 Florida Legislature, the site had to be available immediately. It had been expected that Orange County would buy the property and donate it to the state, but the County lacked the necessary funds. Eighty-nine Orange County residents pledged a total of $1 million in cash and securities to secure the purchase of the site. Millions more would be needed to begin construction. Martin Anderson called Governor Haydon Burns and Dial flew to Tallahassee to argue for immediate funding. The Governor agreed and ordered the project to be moved to No. 1 on the higher-education funding priority list.

The next step in the university’s formation was the selection of a president. In October of 1965, the BOR unanimously chose Charles N. Millican, dean of the College of Business Administration at the new University of South Florida in Tampa. A few months later, in December, Millican opened the University’s first offices above a drugstore at Church Street and Orange Avenue in downtown Orlando. Among his first tasks were making decisions on designs and drawings for the buildings, recruiting academic and administrative staff members, planning curriculum and giving speeches.

By the time Millican was chosen as president, the BOR had already determined that Central Florida’s higher education needs had changed from what legislators had originally envisioned. Market surveys of high school and community college students taken showed that Central Florida needed business people and teachers in addition to scientists and engineers. So, the regents decided to include liberal arts, education and business studies in the university curriculum, in addition to computer and engineering courses.

In February 1966, the Citizens Advisory Committee and the Board of Regents, hoping to attract more high-tech industries to the area, selected the name Florida Technological University (FTU) for the new school. The name had the advantage of being both descriptive and distinctive, easily remembered and shortened, and not geographically restrictive.

Previously to the school opening, on April 5, 1968, the official university seal, Pegasus, the winged horse of the muses in Greek mythology was selected, with a single star and the motto “Reach for the Stars” and the school colors of Black and Gold were introduced. The motto was a challenge and admonition to students to always aim high, try harder and go beyond what they believed possible. Pegasus contrasted and connected the old and new, the humanities with science and technology. In 1974, at the request of students, a competition was held to create the FTU alma mater, with music faculty member Dr. Burt Szabo’s music and lyrics selected from the many entries.

An aerial photo of Florida Technological University (University of Central Florida) showing Millican Hall, the Library, the Math & Physics Building (now, Mathematical Sciences), the initial Computer Center, and the Chemistry building. Written on the back of the photo is “This photo was taken in the early 70’s when there were still only a few buildings on the campus. The computer center, just to the right of the library, consisted only of the first part of the present structure. The tent in the top right of the picture was used for performances by the Theater Department.”

In 1978, Dr. Millican decided to return to teaching in the College of Business, and Dr. Trevor Colbourn became the university’s second president. The new president realized that the community population had changed and diversified, and so had the University. Many students were now enrolled in widely varied academic programs, reflecting a shift in demand for strictly technological and scientific education as the local economy diversified. In December 1978, Governor Reuben Askew signed legislation changing the school’s name from Florida Technological University to the University of Central Florida. By the time Dr. Colbourn resigned to return to teaching history in 1989, UCF had a football team, a marching band, four doctoral programs, a Research Park, and seven endowed Chairs. The academic programs had also been diversified and reorganized to create the College of Arts and Sciences.

Dr. Steven Altman became the University’s third president. His contributions ranged from hiring strong deans to raising research dollars to making clear growth plans to boost the University’s profile. By Spring of 1991 the University had completed a “blueprint” for UCF’s future that included a Master Plan for new construction to accommodate a growing research mission and a student body that was expected to more than double in the next twenty years. UCF was now a “Metropolitan University” that would provide facilities and academic programs to match the community’s greatest needs.

When Dr. John Hitt arrived from the University of Maine in 1992 to become the University’s fourth president, one of his first moves was to draw five clear goals for the schools that would become part of the strategic plan and take the University into the 21st Century. As of March 2011, 56,235 students are enrolled, making UCF the second largest school in the country. UCF has 212 degree programs in 12 colleges and 9 regional campuses. Among UCF’s alumni and students are a Miss America, a Pulitzer Prize winner, a NFL quarterback, a Rhodes scholar, a NASA astronaut, a World Cup/Olympic Soccer champion and the five creators of “The Blair Witch Project”; the most successful independent film of all time.

UCF has become one of the nations leading metropolitan research universities through its community and corporate partnerships. UCF still stands for “Under Construction Forever”; planning, building and creating new programs, facilities and opportunities for Central Floridians as it continues to “Reach for the Stars.”