The following research was conducted by Brandon Nightingale in 2018 and is used with his permission. Images are courtesy of UCF Special Collections & University Archives.

On October 29, 1969 the Black Student Union was formed at Florida Technological University (now University of central Florida). Because most of the students at FTU were white, black students felt the need join together to create real change on campus. Student leadership positions, clubs, fraternity and sorority life were all held by white students during this time. Sixteen out of the twenty-five black students at FTU collectively formed a union that would fill the absence of black leadership on the campus for many years to come. Dan Slater and Roland Williams were elected as the first President and first Vice President of the BSU in 1969. In an interview with the Central Florida Future Slater stated that the BSU would provide “an organization that black students can identify with to the fullest” The union wanted to stress black pride and unity, help to improve communication with administration, and begin to celebrate the lives of well-known black Americans. The only requirement to join was that you needed to be a FTU student and that all officers must obtain a minimum 2.0 GPA. Within the first year of existence, the BSU started their first community service project. The Thanksgiving Food Drive would become an annual event where the BSU collects and delivers food to the Salvation Army to be distributed to less fortunate families within the Orlando area. 1, 2, 3 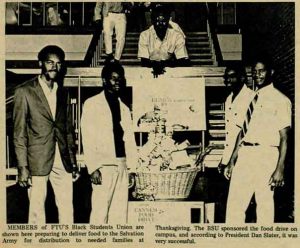 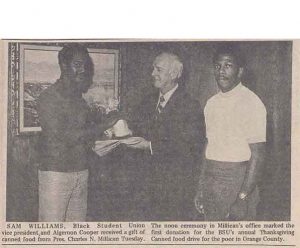 Under the leadership of Dan Slater, the Black Student Union began to demand change on campus. In December of 1969, Slater and five other representatives of the BSU met with President Charles Millican to address their concerns over the lack of black faculty and black history curriculum on campus. After some discussion, the six students walked out of the meeting because they felt as if their voices weren’t being heard and nothing would be accomplished. Finally, in the spring of 1970, President Millican gave in and History 324-01, Black American History was added to the course schedule. The course would focus on the “history of the Negro in Africa and the United States.” Joseph Taylor, an assistant professor of American History at Bethune-Cookman College in Daytona Beach would be asked to teach the course, making him the “first part-time black faculty member at FTU.” The black history course was supposed to be the start of the black studies curriculum that the students demanded during the meeting with President Millican. 4, 5

By 1970, the BSU went on to establish an annual Black Liberation Week, during the month of February, honoring the legacy of Malcolm X, assassinated on February 21, 1965, by playing old videos and speeches of his on the campus. In the spring of 1972, the BSU started Black Expression Week. In 1975 the name was changed to Black Awareness Week. This was seen as an “opportunity for black FTU students to celebrate African and Afro-American culture.” The week included a fashion show, tours given to local area high school students, a concert, a day for students to dress in African clothing, and words from a guest speaker. 6, 7 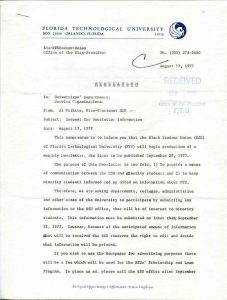 Memorandum 1977 (from the University of Central Florida Office of the President: H. Trevor Colbourn Presidential Papers) 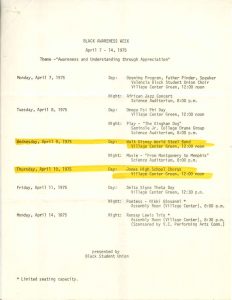 Black Awareness Week 1975 (from the University of Central Florida Office of the Vice-President for Academic Affairs: Carroll B. Gambrell, Jr. Records)

The BSU at FTU stayed in communication with the other Black Student Unions across the state of Florida. In 1977, under the leadership of President John Stover, they formed the Inter-Campus Committee with the Black Student Union at Rollins College in nearby Winter Park, Florida. The committee would consist of members from both colleges, making the relationship between both unions stronger than ever. The BSU also had plans to connect with the black students at Valencia and Seminole Community Colleges. To “provide a means of communication between the BSU and minority students at FTU,” on September 28, 1977, the BSU began publication of a monthly newsletter titled “Our Commitment… The Betterment of Life.” Although the publication only lasted a few years, the BSU began to expand its network to wide range of students across the region. 8, 9, 10 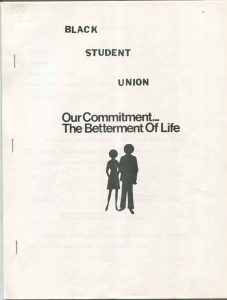 In the late 1970s, the Black Student Union began to face hard times. During the fall of 1977, they were forced to cancel all events due to the lack of funding from the Student Government. In a meeting with two members of the BSU and 3 members of administration on campus, the BSU threatened to stage a “sit-in” during the FTU Open House on November 6 if administration didn’t approve their list of 20 demands. The demands included getting funding from the Student Government and establishing a black studies program on campus. The BSU had been an active organization on campus that provided services for all students on campus. Despite not having much money, over the years the BSU brought civil rights leaders to campus and created events for students on campus to attend. 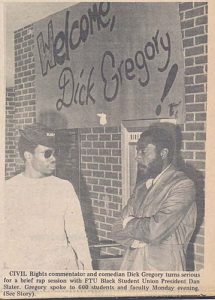 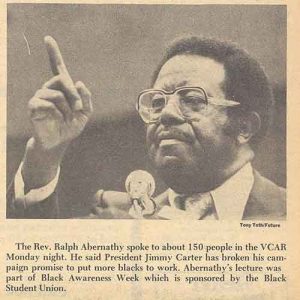 Finally, the administration listened and in 1978, the same year FTU became the University of Central Florida, the BSU was placed under the branch of funding by the UCF Student Government. Although the BSU began to gain recognition on the campus, they were still a black organization on a predominantly white campus. Because of this, they began to face times of difficulty as the years went by. In April of 1978, the Black Student Union was accused, by the Student Government President Bob White, of charging money for its annual Spring Fashion Show. The show was already being funded by the Student Government, and the BSU would be in direct violation of organizational policy of clubs on campus if these accusations were found to be true. This would lead to an audit of the Black Student Union’s accounts ordered by Bob White which was made public via the Central Florida Future. This would lead to a war of words between President Stover and President White, and even students chimed in on the Editorial Board within the publication. Although the BSU was cleared of any wrong doing, the damage had already been done. Because the BSU was being audited, their accounts were placed on hold and this prevented them from conducting their legislative elections. 11, 12 The feud between the BSU and Student Government began to intensify, as the days went by. Student Government President Mark Omara, who inherited the dispute from previous president Bob White, attempted to diminish the BSU. He began to campaign for “a minority student organization on campus to serve all the minority students.” Omara often attacked BSU, blaming their lack of success on leadership within the organization. 13, 14, 15, 16 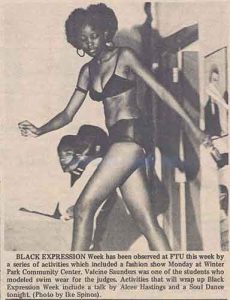 Finally by 1979, new faces were in office, time passed and the feud had come to an end. 17 The BSU could finally look towards the future and achieve new heights. The organization went on to establish UCF’s first Gospel and Cultural Choir, originally the Black Student Choir, in 1979. Students that were members of the BSU became motivated to get involved in other organizations on campus. In 1980, James Blount, former VP of the BSU, went on to become UCF’s first black Student Government President and in 1981 he became the first UCF student to be appointed to Florida’s Board of Regents by the governor. 18, 19, 20

Under the leadership of Richard Sherrod in the late 80s, the BSU reached its greatest success. Sherrod took over as interim president in the summer of 1988 and became President in the fall. Sherrod wanted to “increase student participation, become more visible in the community, and provide programs and functions for the general student population.” Under Sherrod’s reign, the BSU was able to earn more money from the Student Government, under Sherrod’s reign, than ever before. This was only the first of new changes to come for the union. Membership had reached 250 members, something that had only been done once back in 1977. In the fall of 1988, the Black Student Union would change its name to the African American Student Union. The change came about at a state conference on March 3-5, held in Miami. Representatives from BSUs all over the state of Florida gathered to discuss the name change. Following a two year movement to get the name changed by representatives across the state, it became official. The reasoning behind the change was that many felt that the term black “is a concept which does not give a reference to any country and it has negative connotations.” 21, 22

The Union had finally gained credibility across campus and things were finally going well. The BSU was doing so well that in April of 1990, there became a push for a “white union” to form on campus. This was an attempt to undermine the work of the BSU, even though the BSU didn’t discriminate and had white members within the organization. While the news of the “white union” did make headline in the Central Florida Future, no union was ever officially formed on campus. 23

The African American Student Union eventually changed its name back to the Black Student Union. Today, the BSU is still an active organization and continues to provide a platform for minority students on campus. Members consistently take part in social justice programs and community service projects throughout the Orlando community. Together, BSU strives to create a ‘home away from home’ environment for all members, and to encourage students to become campus leaders. 24